TO SCHEDULE AN APPOINTMENT CALL: 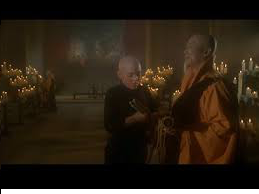 In the 1970’s TV show Kung Fu, Kwai Chang Caine (David Carradine) is the orphaned son of an American man and a Chinese woman. Caine is accepted for training at a Shaolin Monastery, where a blind Master Po develops an affectionate, mentoring relationship with the young Caine.

Master Po: You are the new student! Come closer.
Young Caine: You cannot see!
Po: You think I cannot see.
Caine: Of all things, to live in darkness must be the worst.
Po: Fear is the only darkness.

Master Po then instructs Young Caine to try to strike him with a broom that Caine is carrying. Caine quickly learns that although Master Po is blind, he is very capable of defending himself with ease.

Grasshopper becomes the nickname Master Po calls Caine, which embodies the loving relationship between the mentor and the student, the expert and the beginner. Later in my career, I started referring to one of the students I was supervising as “Grasshopper.”

After a successful career as a prison psychologist, I am learning how complicated the private practice world is. I am a grasshopper once again, and I am feeling very awkward and uncertain at times. I felt the same way over 30 years ago, when I had just finished my own Master’s degree in psychology. To help me with my fear, a mentor back then quoted another Oriental teacher, Shunryu Suzuki:

In the beginner’s mind there are many possibilities; in the expert’s, there are few.

Rather than to devalue the beginner and celebrate the expert, Suzuki is saying that to retain one’s “Beginner’s Mind” is a goal worth striving for, rather than to only pursue mastery. Beginner’s Mind refers to having an attitude of openness, eagerness, and lack of preconceptions when studying a subject, even when studying at an advanced level, just as a beginner would.

Well, that sounds great in theory, but I told my current private practice mentor that being a beginner again after 30+ years of expertise really sucks, in my opinion. His reply: “Embrace the suck, Grasshopper!” There is often wisdom in humor. Substitute the word “fear” for “suck.” What am I afraid of? Being viewed by others as a novice, uncertain, or failing to be helpful. The most prestigious professional golf tournament is called “The Master’s.” There is no famous tournament named “The Beginner’s Cup.” It is often difficult to see any value whatsoever in beginner-hood.

Fear is a powerful emotion, in response to any perceived danger, which urges one to flee. To embrace fear, to move towards it rather than run away from it, is very counterintuitive. How do you embrace fear?

1. Observe your bodily experience of fear with acceptance (not judging your experience of fear as “bad”).
2. Breathe slowly and deeply.
3. Tell yourself that you are not, in fact, in actual danger.
4. Believe that change is possible.

In the animated movie Kung Fu Panda, the Panda, with no previous training in Kung Fu, is tasked with defeating a fearsome enemy. In a humorous reference to the original TV series, the Panda’s name is also Po! The Beginner is supposed to quickly become the Dragon Master. As he opens the scroll to bestow him with the wisdom to obtain limitless power, Po is astonished to discover the scroll is blank. His “father,” a duck who runs a Chinese restaurant, has a “secret ingredient” in his noodle soup that turns out to be nothing – there is no secret ingredient. Po learns that customers just believe there is a secret ingredient, so the soup tastes special to them. One has to believe that change is possible for it to become possible.

In the beginner’s mind there are many possibilities; in the expert’s, there are few.